A Christmas Trip to Birmingham

I’ve visited Birmingham quite a few times now, as my boyfriend’s sister lives there. So we tend to visit a lot! Each time we go, we generally discover something new to see or do. Birmingham is a city I do really enjoy visiting!

The last time we visited was just over two weeks ago now. We headed there for a festive fleeting visit, but managed to cram quite a lot in!

We stayed with Kieran’s sister and her fiancé. However, there are plenty of hotels to stay in, in and around the city.

We arrived on a Sunday evening and headed straight to a place that we’ve been to numerous times now, that I had to share with you all – Akbar’s. If you’ve never heard of Akbar’s and therefore never been, you m u s t. It’s one of the best Indian restaurant’s you’ll ever eat at and you can get a family sized naan that is literally 2 feet tall (and wide!). The branch in Birmingham is huge and I believe stays open and serving food until midnight! We’ve never eaten a bad meal there and this time was no exception. I usually just enjoy dipping the naan bread into the sauce, so myself and Kieran shared a Chicken Tikka Masala, Egg Fried Rice, Bombay Aloo (absolutely love this stuff!) and a Garlic Naan Bread. Thinking about it now is making me hungry and I now want an Indian.. It was quite hard to take pictures of the food because of the lighting, so the only half decent photo I have is of Kieran’s sister’s Lamb Bhuna – which was every bit as delicious as it looks. Just for transparency, this was the only part of the trip that we paid for ourselves.

The following Monday, Kieran and I headed into Birmingham’s city centre to find a few hidden gems. Our first stop was the Christmas markets – definitely not a hidden gem, but still worth visiting Birmingham for. There’s stalls lining the streets that go on forever and it’s definitely a must visit around Christmas time. We were very much in the mood for a festive hot chocolate, so popped into one of the seated bar area’s and grabbed a hot chocolate each – Kieran went for a standard one and I opted for the Bailey’s offering, delicious! 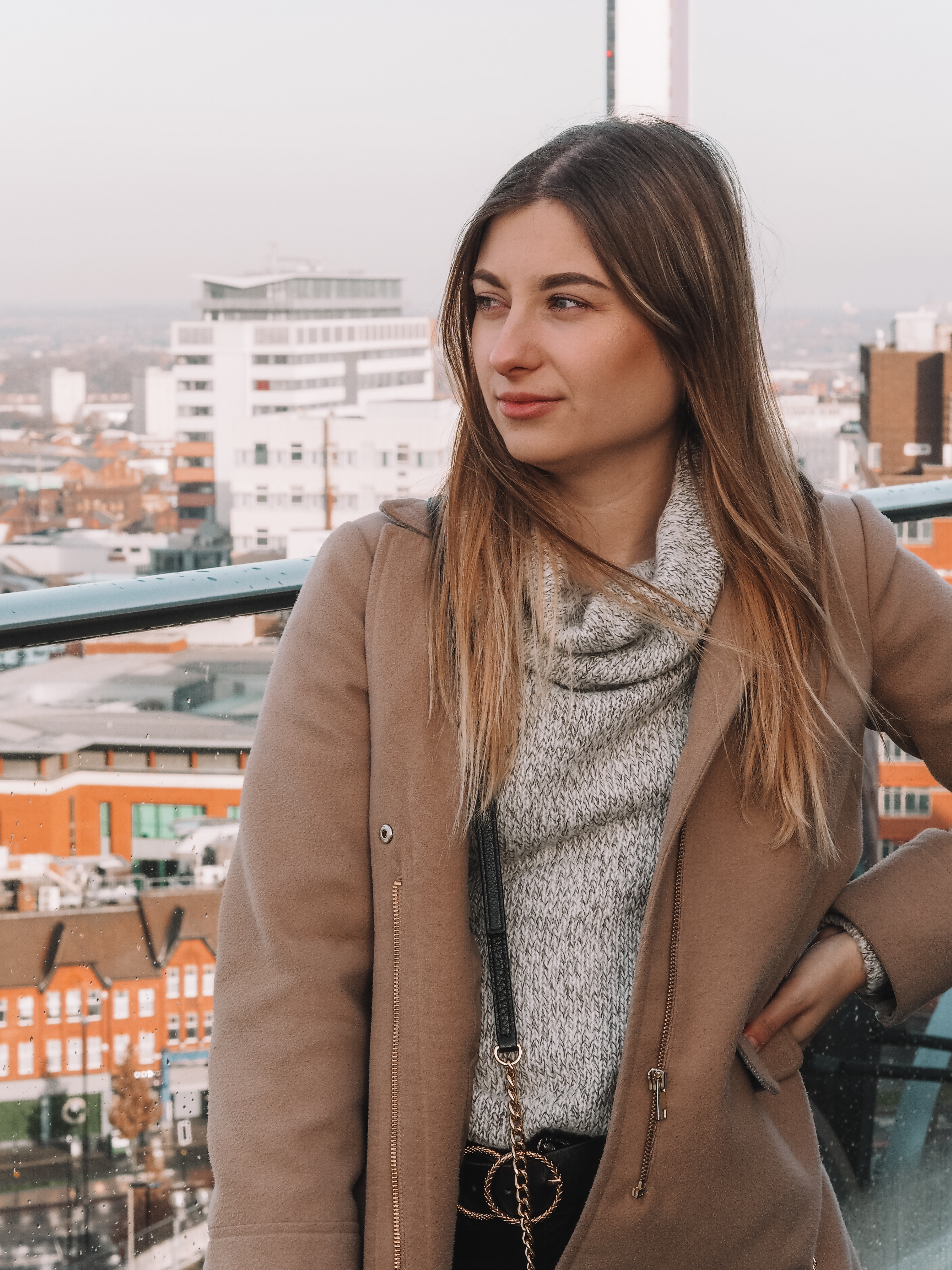 Once we had finished our hot chocolate’s, we had a little mooch around the Christmas stall’s and then headed to the Library of Birmingham. Kieran’s sister had informed us that the views from the top of the library were incredible, so this was a must see for us.

As we entered the library and made our way up to the top, it was already breathtaking inside! Books and books lined the walls and it was old fashioned, mixed with modern areas for student’s to study and an extremely modern outer building. You’ll only know what I mean if you’ve ever been inside before and if you haven’t, I couldn’t recommend it more! The outside garden/balcony area’s showed off the amazing city views of Birmingham. I can only imagine how gorgeous these outside area’s are during the Summer time. There are two levels, one obviously being higher than the other, and both boast stunning views of the city. I honestly could not recommend visiting this library more and I can’t believe it was our first time here either!

We spent quite a bit of time up on the library’s ‘roof’ – snapping pictures and just taking it all in. So our tummy’s were now telling us it was about time for lunch! We stumbled upon a cute little British pub called The Shakespeare Inn. It’s literally just outside the Grand Central, so is in a perfect spot.

Kieran and I decided to share a few dishes, as we didn’t want anything too heavy – seeing as how we were going to be walking around again that evening! We opted for the Box-Baked Camembert, Dirty Fries (with a sticky BBQ sauce and sausage pieces), Sticky Chicken Wings and Garlic Dough Balls. First things first, these dirty fries were the tastiest things I have possibly ever eaten!? They were absolutely delicious and we definitely should have ordered more.. Camembert is always my go-to and you guys must know by now how much I love it! The chicken wings were for Kieran, he absolutely loves meat and says they were super yummy.

Unfortunately, the garlic dough balls would have been amazing if they hadn’t of been literally rock hard.. We were a little confused and thought they’d maybe been microwaved to heat them back up, so they were disappointing. However, everything else was amazing! Great value for money too and a perfect little pick me up to keep us satisfied.

After our lovely little lunch date, we had a small wander around the Bullring (it’s just got to be done!) and then got the train back to Bournville. From there, we jumped in the car and headed back to Kieran’s sister’s house for a couple hour’s rest. This was very much needed as we’d been walking around all morning/afternoon and still had more walking upon us later on that evening!

Something we have seen before are the beautiful magical lantern’s at the Botanical Gardens. They did not disappoint last time and it’s something I knew I had to share and have in this festive trip post! We arrived just after the opening time of 5pm and luckily, in Winter, it’s dark enough by then to see all of the magical light’s. The Botanical Garden itself is beautiful and I must visit during Summer, to see it in all it’s natural beauty!

The magical lantern’s do always make you feel that little bit more festive and they have different music playing around the gardens. Be sure to wrap up, as the whole thing is obviously outside. It does get chilly during December in Birmingham! The Magical Lantern Festival is not one to miss and really does get you into the festive spirit. Ticket’s aren’t too pricey either. Most of the time Groupon normally have an offer on them, making them even cheaper too!

So that’s my in-depth round up of everything we got up to during our visit to Birmingham. It really is somewhere I love going and I always love a good city trip! I will also have a video of our trip to Birmingham going live within the next couple of week’s, so keep an eye out for that on my channel.

Have you ever visited Birmingham or any of the places I’ve mentioned?xoxo